The Ping and Pong in the Mind 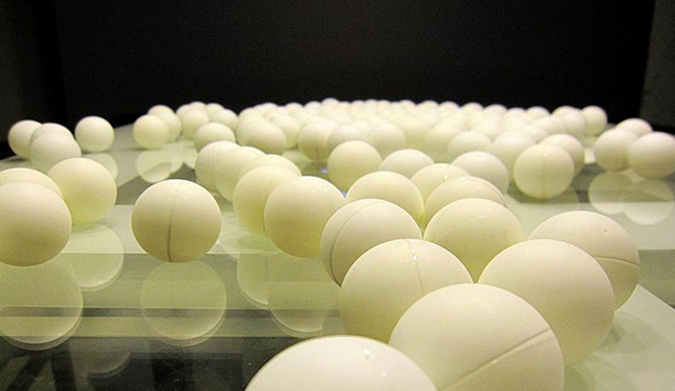 Using a visual of the game of ping pong, one can get an idea of how the mind also has been trained to go back and forth relentlessly between this and that, this and that without thought to the many things in-between.

Imagine you are playing ping pong. The little white ball is being hit back and forth. You can hear the plastic hitting the paddle, then the table and back again.

You’re probably saying, if you cease the ping and pong there wouldn’t be a game called ping pong. But this article isn’t about ping pong. The visual asks us to relate the bouncing ball to the activities of the mind. Should we play ping and pong all day long, everywhere we go, with every move we make? Do we want to ping and pong every thought?

This is the way of dualistic thinking with its comparisons and competitions, taught to us in the western world. It is the old paradigm perspective of divide and conquer. In a way, this polarity of thought  is nothing more that a ping pong game with thoughts.

In order to see the relativity you can imagine your neurons clicking rather than ping and pong. The sound is:

What if the logical and creative learned to collaborate instead of the continually weigh in the balances the back and forth comparisons and this or that options it so often indulges in during the dual polarity game playing in the mind?

At a blog called ‘The Newer View’ one of the goals is to control the rhythm of the ping and pong routine playing in our mind. We’ve been trained to play the ‘thinking game’ in a certain way that blocks freedom of thought. Oh, we think we are free to think as we wish, but that is not so. Circular thinking is frowned upon in favor of linear. Logic is taught to be favored over creative. Not all of us obey these suggested formats, and that is called a rebel.

In a dualistic paradigm and with an educational system which trained us to think via that paradigm, many thinking styles are like toys in a child’s playpen. The child is given a certain amount of toys and allowed to play freely but they are still in a boundary. This is supposedly done for the child’s safety. For adults under a social programming schemata, in theory, its also for their own safety.  Most developed countries have taken a parental role over the populous of their country. Citizens are not respected as free-thinking adults but children who are too immature to make their own decisions. When we think differently and share those thoughts with others, we are often called crazy. What the heck are we thinking, is what is asked.

Thinking is being controlled like toys in a playpen. It is taught that we can only think this or that. From kindergarten on up we have been taught how to stay in the playpen of ping and pong. When looking at the rhythms of ping and pong and considering how to arrive at better mind musings, we can consider the need for balance, maybe see the ball coming to stillness in the center, hovering there, resting its cause of this or that. The Newer View suggests merging the ping and the pong. What would happen if we conceptually merged the good and bad, the up and down, the left and right? What if we boycott dualistic thinking in the mind? We will need a new model to do so.

The cliché, “opposites attract” is often used in human affairs of the heart. Have you ever stood on the outside of someone’s relationship looking in, wondering why two people that have absolutely nothing in common are in love? Male and female are also opposites which attract. Ions also indulge in finding other ions with an opposite charge. It’s nature. So why was there so much conflict in the world with this idea of opposites or differences needing to war rather than merge?

If opposites attract, then likenesses repel. So, when you hear the media cry about terrorists or any enemy threatening on the horizon, recognize that those seeing the enemy are exactly like the enemy. They are repelling. While opposites are uniting all over the world and mingling to share perspectives, love, lives and more, for an expansion rather than annihilation. This is a definitive shift in perspective if it can be seen.

So, why are we so comfortable in hitting the ball back at each other? Could it be we shouldn’t be looking for the ‘like-minded’? We need stimulus, after all. Do we believe sameness is the quest of the future as we give names to the new paradigm such as co-op and oneness, or should we look in the mirror of life and see the beauty of opposites merging?

Could it be we have gotten so comfortable with our ping and pong that we can’t let go of everything that implies? Could it be we are so deep into the dualistic warring paradigm we wouldn’t know what to do with a new model of thinking? Buckminster Fuller had the right idea when he said,

“You never change things by fighting the existing reality. To change something, build a new model that makes the existing model obsolete.”

Are you thinking that’s a tall order for a paradigm which nurtures its ping and pong? But it asks a powerful question for a potential new model: If opposites merge, can we literally begin a paradigm of merging opposites? Merging opposites would be the new model, which brings us to Bertrand Russell’s statement:

“Ideas are changed, not by “will,” but by other ideas.”

We cannot just will our minds to think differently. Something more intricate is happening. One would have to follow through on seeking new models / ideas that would replace old patterns of thinking such as ping and pong. In the present evolution of consciousness, many leaders know we need new models, but continue on with ping and pong expecting different results. Some great mind figured it out when they said:

That is ‘seriously funny’, a common oxymoron. One cannot emerge from ping and pong without a new model. It would be insanity to think so, yet many people try to change the world using the same models. And, the etymological root for Oxymoron is applicable here. The Greek root is oxumoron which means pointedly foolish. The whole misappropriation of opposites is foolish. Someone got it backwards. And, we moved so far away from the line with two points it’s a wonder the mind hasn’t done something to keep up. Yes, quite moronic not to notice the glitch that exists.

Did you know that the model of opposition was solidified in the slave days? It was Willie Lynch who sent a letter to all the slave owners telling them how to pit the slaves against each other so the owners would maintain control over them for over 400 years. Is it any different now with everyone being taught by social controllers that opposition is reason to hate and a reality? And we thought slavery was over! It has spread to all races. The human mind remains enslaved to the idea that opposites means hate.

So it goes with ping and pong.