Rebellion as Rebel Lions – Seeing in the Dark 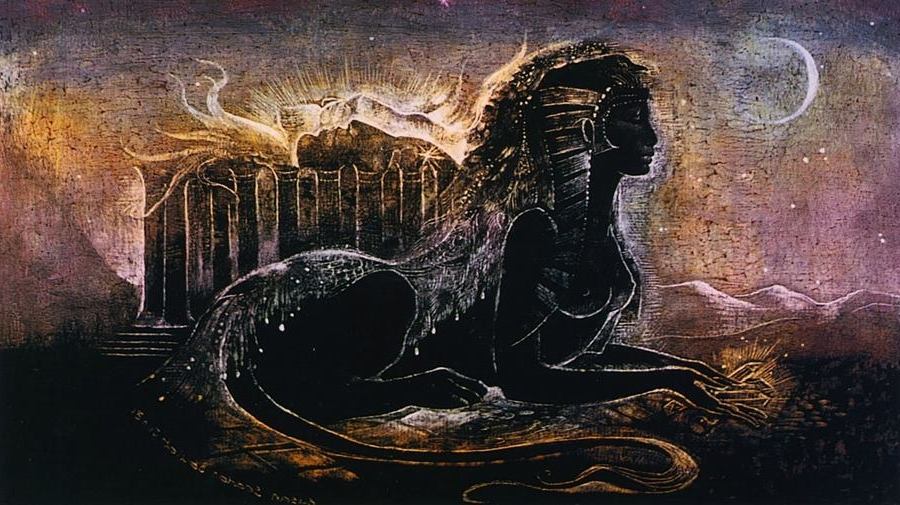 I had a struggle with this title because there is so much to be said in the idea, which includes a journey to the Nether, which used to be a good thing. In Buddhism, the journey to the Void or Nothingness still is good thing. Then there was the misuse of the word ‘craft’ in religious ideas and ‘politricks‘.

I really wanted to call this post “Rebellion and the Journey to the Nether”, but I wasn’t sure people would get it. And, it’s not really about a Egyptian ritual either, even though the picture included with this post is one from Egyptian lore concerning the symbolic practice of death and rebirth in the background and the Female Sphinx in the front. That is exactly what the journey to the Nether is about, however — the journey to the void and the nothingness, the nether or death to the old in order to come back revived, fresh and new. This journey takes a rebel willing to make it. Oh my, the jewels they bring back.

Then the story includes how ancient Kings blocked the way to this deep inner contemplation and how Rebel Lions is a word play for rebellion, something along the nature of Bob Marley’s Buffalo Soldiers, or as many Rastas consider themselves ‘Lions’ because of Haile Selassie’s personal pet Lion, title (Conquering Lion of the Tribe of Judah) and symbol, as well as a dreadlock lion man’s mane. How do you title a post like that? I’m not saying this is a Rasta post, either. It is a Nether Journey Courage post which reveals that in the darkness is the greatest light and that Black and Light make Gold, and that we are being lied to via words, such as craft and rebellion. Now, to the point….

Have you ever heard people say that ‘rebellion was witchcraft’ quoting from the Bible?

Do you know why they say that?

Because rebellion is LIBERATION of your MIND. “Emancipate yourself from mental slavery, none but ourselves can free our mind.” Bob Marley

Rebellion, in this sense, means ‘thinking for yourself’. It doesn’t mean hurting others, but it does mean freeing your mind and the fight for that freedom should be for inner power and clarity, not fighting another.

Social engineers do not want people to be free and think for themselves. As control lords they do not like sharing their space with spiritual freedom flyers. So, they mucked with perception. How did they do that?

I once did a deep study in the bible on ‘craft’ and ‘witchcraft’. Using a Kabbalistic method of investigation called PaRDeS, one can look at the literal meaning of a scripture and then the allegorical, hidden and esoteric in every scripture. After months of cross-referencing for myself, the end result was that ‘witchcraft’ was in truth politics. Better known to rebels as ‘politricks’ which began with the 5 Philistine Kings who metaphorically blocked the way to deeper contemplation. This reveal is great!

In the Bible, there are secrets hidden in names. These interpretations of names says a lot if one takes the time to look for themselves. There is a story about Joppa, Jerusalem, Beth-Horon (The Nether) and Gibeon – Beauty, Peace, House of Hollowness and The Hidden of God – which are the greater mystery underneath the names.

When the Nether (Beth-Horon) is mentioned, it is not about an underworld for the dead. It is a place found on the way from Jerusalem to Joppa (From Peace to Beauty). These commonly known cities or towns from biblical times play a role in the Nether story and the Rebel Journey – Rebel today because it was long ago closed off.

The ‘house of hollowness’ is in-between ‘peace’ (Jerusalem) and ‘beauty’ (Joppa). Between the two places, about 2 miles apart, was the Descent and Ascent to Beth-Horon (House of Hollowness or Nether) from Gibeon (Hidden of God). ~ The Ultimate Bible Dictionary. You could correlate this story with why Christ went into the depths of Hell to retrieve keys before rising to Heaven. The House of Hollowness (The Nether) has gems, pearls and keys worth retrieving from subtle consciousness, but who will dare go there? The rebel, the fierce, the daring who ‘Will’ to see the truth. That is who will go there. But….is it really so scary? No.

The Metaphysical Bible Dictionary offers some ideas beyond the name translations. Starting with beauty and peace, it says that in consciousness associations, Joppa represents “exuding an exalted appreciation of beauty as the central or dominate characteristic within”. It also says that it is a “group of thoughts in consciousness not far from the heart center” (Jerusalem) defined by this dictionary as a “habitation of peace and the abiding consciousness of spiritual peace”. So far there is a respect for Beauty and a maintaining of inner Peace in consciousness domains.

In-between these two cities was the Nether experience, The House of Hollowness, Beth-Horon, which is defined by this dictionary as ‘a thought center deep within consciousness where error is removed’. Now you can see why people don’t want to go there. It’s like a mirror of deep hidden dark inner secrets that need to be dealt with. This is why I prefer the term ‘unnecessary visions’ over the word ‘error’.

For me, as a word player, error translates to era, or an age of political tricks. It’s not personal because we are who we are because of political moves through the centuries. The idea of right and wrong developed on social surfaces and in religions, clouds the truth of this deep thought center, whereas ‘unnecessary visions’ makes it personal and stimulates clarity of subtle perception. The Nether is nothing to be afraid of. It is the ‘deep of you’.

This place of the Nether was closed off by 5 Philistine Kings – Political Craft. This was a crafty metaphorical ploy. Stop people from deep contemplation in favor of superficial existence and you have obedient slaves. You rule their thoughts and souls if you stop them from going deep within. Superficiality is a type of hypnotic trance that the mind is kept in, in order that other thoughts can be easily put in via suggestion on televisions and fear propaganda, for example. People who do not think for themselves need this, however. People who do think for themselves do not.

The mystery of the road blocked by the 5 Philistine Kings is about a road to ‘deeper contemplation’. This road is found in Abraham’s journey to the nether called ‘Beth-Horon’ in Hebrew, meaning House of Hollowness. It is found in the Buddhist journey to the Void. Whether we call it Nothingness, The Void, or the House of Hollowness or Nether, death and rebirth, it is a place of contemplation within the depths of self. It is the place of freedom (Free-Domes or Free Minds, Free Heads).

According to Carolyn Myss, using rebel behavior can have a positive effect.  In her Archetype Card Deck her card for Rebel suggests, “Rebel is a key component to all human growth and development.

So Rebel Lions (Rebellion) Carry forward, inward and up. Hails!